Nigerian Immigrants Traveled for 11 Days at the Helm of the Ship, Incredible Images!

Spanish coast guards rescued 3 refugees who had been traveling for 11 days in the helm section of a ship sailing from Nigeria. Refugees were treated.

Three refugees who traveled for 11 days in the helm section of a cargo ship departing from Nigeria were rescued by the Spanish coast guard.

The Spanish Coast Guard police shared the images of the incredible event on their official Twitter accounts.

In the photos that spread rapidly on social media, it is seen that three stowaways are sitting at the helm of the Maltese-flagged 'Alithini II' tanker, which is learned to carry oil and chemicals. 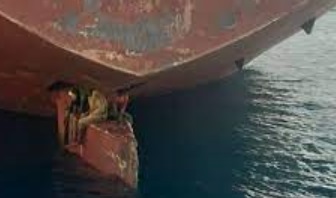 Departing from Lagos, Nigeria on 17 November, the ship arrived in Las Palmas, on the Grand Canary island of Spain, on Monday afternoon, after an 11-day cruise.

The authorities stated that the refugees, who showed signs of thirst and hypothermia after the difficult journey, were urgently hospitalized and said, "Those who were transferred to the port were treated by medical teams."